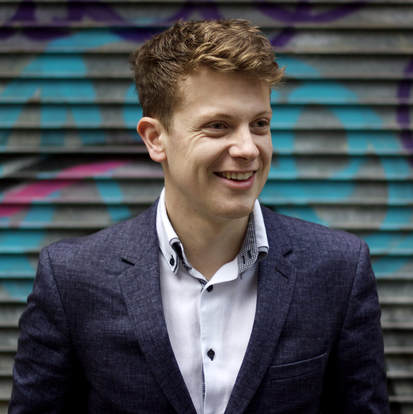 Sam Rodwell completed his undergraduate at The Royal Northern College of Music in Manchester with a first class honours degree under the tutelage of Craig Ogden. Sam went on to complete his Masters in performance also at the RNCM with a distinction. The college subsequently appointed him as an 'Associate Guitar Teacher' after excelling over a six year period .  In his very first term as an undergraduate he won the String Department 'Salon Prize' making him the first guitarist to win this competition for nearly 30 years. Also during his first year at music college Sam was offered the opportunity to perform on guitar, banjo and ukulele in Shostakovich's rarely performed ‘Paradise Moscow’. In his fourth year he went on to attain a place as a finalist in the highly prestigious ‘Gold Medal’ competition. He has similarly appeared as a finalist in the New Elizabethan Award 2022, Ivor Mairants Guitar Competition and The Royal Overseas League strings sectional.
Sam has given many recitals in some of the most recognised concert halls in the U.K. including a solo performance for 1500 people at the De Montfort Hall (Leicester), St Martins-in-the-Fields, Bridgewater Hall, RNCM Concert Hall, Buxton Pavilion and many more. He has also featured at many festivals including the 'World Saxophone Congress' in Zagreb, Croatia, where he premiered a new work with his Saxophone and guitar duo (Duo Antipodes), a solo recital at 'Hellys international Guitar Festival', The Cardiff Guitar Festival, Craig Ogden's Big Guitar Weekend, Winchester Festival, World Youth Guitar Festival and RibFest.  In 2016 he made his television debut on Sky Arts whilst taking part in ‘Guitar Star’ making it to the final 8 and being featured in 6 out of 9 episodes. Sam has also been an ambassador for Yamaha (U.K.) in promoting their classical guitar range. He has performed in masterclasses for artists including David Russell, Mark Ashford, Chris Stell, Milos Karadaglic, Gary Ryan, Michael Lewin, Gordon Crosskey and Julian Byzantine.
Sam's love of chamber music has led him to perform with many different ensembles, covering repertoire from the renaissance to the 21st century. He has had notable success performing many concerts with the ‘Roth Guitar Duo’ with Emma Smith. Sam has performed with a number of British orchestras, including the Manchester Camerata featuring a performance with the world famous accordionist Martynas Levickis.
Sam plays a 2006 Christopher Dean guitar.